Opposing consciousness is the manifestation of the most separated form of consciousness that exists in the universe. It is empowering to be fully aware of ALL of the forces that have direct influence on us.

One of the forces which have had a lot of influence over humanity for a long time is a lower vibrational, deceptive, destructive, extra-terrestrial & extra-dimensional spiritual force that we will refer to as Opposing Consciousness.

This is the occult spiritual force that gives energy & support to the running elite of this planet.  They are negative forces vibrating at lower frequencies, that thrive on negative and destructive energies. In order for these forces to exist they manipulate humans and our energy fields to feed and harness negative LOW VIBRATIONAL emotions such as; fear, anger, greed, revenge, hate and competitiveness and so on. 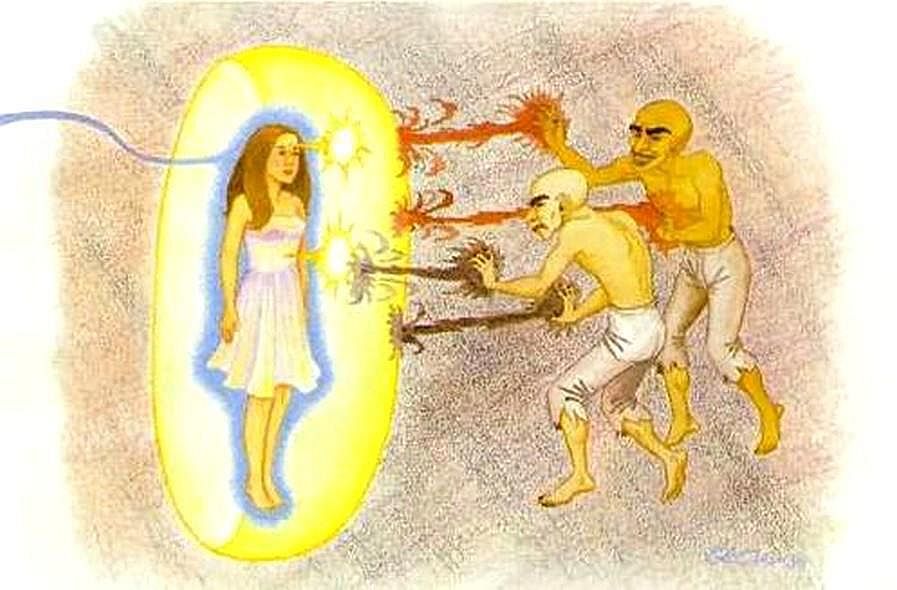 This force have been called archons, fallen angels, demons, djins and various other names, but on this page we will refer to them simply as opposing consciousness.

It is also very important in this context to understand that this force is not the opposite of Consciousness. Consciousness does not have an opposite because it encompasses all-that-is, which paradoxically also includes this deceptive force

Also important to note is that we as a human beings are WAY MORE POWERFUL than these forces; simply because through our heart centers we have direct access to source reality which has the power reshape the entire material and external reality.

By tuning in to higher frequencies such as joy, love, creativity, compassion, cosmic consciousness and by standing in our sovereign birthright to be who we are; we have the power to block and stop he influence of opposing consciousness.

However, this deceptive force does oppose the free flow of consciousness through humans and everything else that channels consciousness.

To infuse fear for the purpose of keeping control, this Opposing Consciousness has often presented itself as the opposite of the consciousness/all-that-is (‘God’), which it is not, and could never become.

This deceptive force is behind the control-matrix that has been put in place for humanity and is working to keep humanity in a Lower Vibrational Energy Construct, which is more rapidly dissolving as humanity is evolving.

If you can imagine Consciousness like a flowing river, flowing in a certain direction with unstoppable flow; Opposing Consciousness is like eddy current flowing in loops within a ‘bubble’ on the side of the river-bank; destined to eventually get dissolved by the mighty flow of the entire river.

KEEPING HUMANITY IN SHACKLES, NOT MUCH LONGER.

This Opposing Consciousness exists because of the propose of complete self-realization, cycles of karma and cycles of time.

It exists like a dark winter season for consciousness to fully experience ignorance.

But this season, the age of ignorance (pre 2012), just came to an end trough the shift in reality. 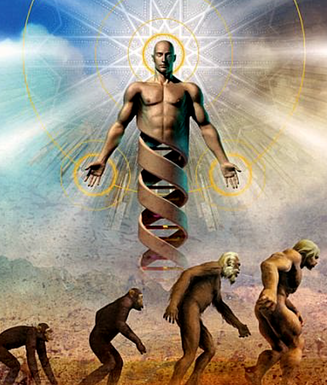 This opposing consciousness have for the purpose of full self-realization been allowed to control, herd & feed off of humanity on Earth for thousands of years now.

And it has been very successful in doing so by keeping humanity in a lower vibrational state through a Matrix of Control within a synthetic reality; veiling us from the empowering nature of reality.

A bit like placing a roof over a plant that naturally grows in the sun, and instead of giving it access to real sunshine, providing it a synthetic source of light.

This may make some sense during winter, but winter is over now and the seasonal shift is has occurred.

Because of the upgrade of reality (the iterated reality); which is the shift and rEvolution of consciousness, the apocalypse (meaning; the lifting of the veil!),  and the new order of power on Earth; this lower vibrational spiritual force is doomed to loose its grip over humanity, and has already lost the only ‘battle’ that truly matters; the vibrational one.

The vibrations of the planet are rapidly increasing day by day and and people are waking up in exponentially growing numbers. Much of it paradoxically thanks to the work of this Opposing Consciousness.

HOW IS THIS EMPOWERING TO KNOW ANYWAY

Simply because by being aware of this force; we can be aware about the situations were they are manipulating us into lower vibrations and overcome their influence.

Opposing consciousness does have an important role for our growth and self-realization up to a certain level.

Opposing consciousness acts as as compass, magnifier and, mirror for our individual and collective fears, blockages and distortions. Our blind-spots of consciousness so to speak.

This way, paradoxically, opposing consciousness helping us to bring to light our own short-comings that we rather keep in the dark.

In the same way Opposing Consciousness is for example helping us to see the more and more obvious downsides of our collective fear & distrust in the abundance of nature, resulting in industrialization of food, the use of pesticides, development of Genetically Modified Organisms and so on.

Because this has been pushed so much into the extremes; people are ever quicker are waking up to their own inner power, the reality of abundance in nature and starting to remember that we can work with nature rather than against her.

This is why organic farming, permaculture, self-sustainable living and so on is starting to make so much sense for so many people, and is growing exponentially.

NOT WILLING TO LET GO

However, all of the above said, this does not mean that we should just let Opposing Consciousness do its thing and that everything will be OK.

Everything will only be OK if we all actively embody our part by following our hearts and inner compasses and thereby bringing in more and more Consciousness into this realm of existence and raise the vibration of the planer from FEAR to LOVE.

Opposing Consciousness has become very attached to its quite brilliantly designed Control Matrix and is not willing to let go, even though the season for their control is over.

Thus, entities of Opposing Consciousness are actively working, intervening and manipulating our auric fields, which is the flow of Consciousness through our chakras, to keep us from from fully connecting and flowing with Consciousness.

Opposing Consciousness does this mainly through two strategies, which both of them involves interventions of our fields, creating an imbalance in the flow of Consciousness either in the lower or higher chakras so that Consciousness cannot fully flow through the Heart Chakra and the entire auric field.

The illustration below shows how a balanced flow of consciousness through the chakras looks like. 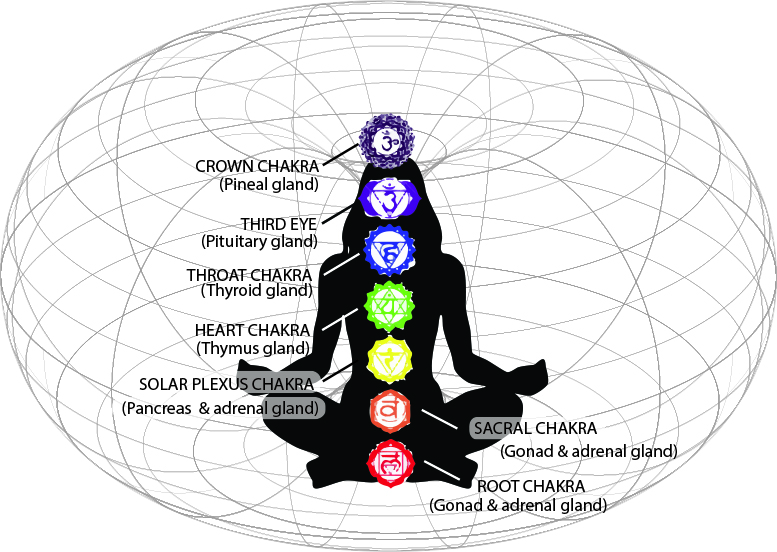 The illustration below shows how an imbalance towards the higher chakras can look & feel like.

The illustration below shows how an imbalance towards the lower chakras can look & feel like. 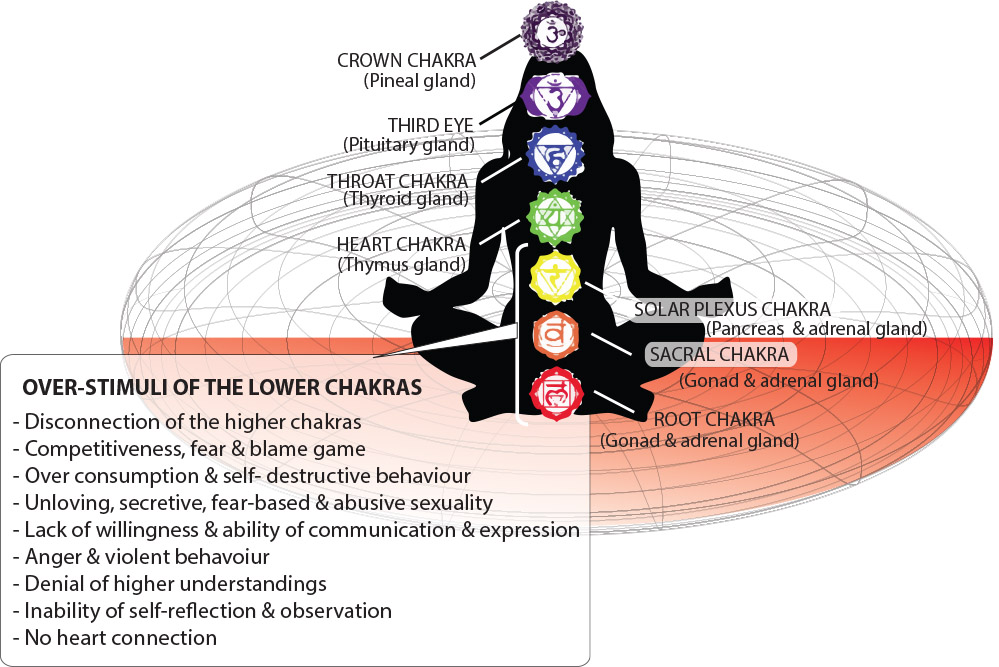 HOW TO EMANCIPATE AND BREAK FREE & FIND BALANCE

Forgiveness & non-judgemental awareness are direct pathway to the heart-chakra, the center-point of the flow of the auric field and the key to healing & regaining of balance.

Forgiveness & acceptance of Self, Others, Opposing Consciousness and All-that-is.

Being aware of the existence of Opposing Consciousness is a start to break free from its negative influence.

To start noticing the influence of this force; we need to acknowledge its existence, without fear.

Thoughts and feelings are waves of Energy (energetic transmissions) and does not always originate from ourselves.

We can be influenced by emotions and thoughts coming from the collective consciousness within a family, a tribe, a nation, a planet or the entire existence (Cosmic Consciousness)  .

Opposing Conciseness like to keep us connected to the smaller aspect of that scale. Keeping us busy with the drama of the small entity (self, family, tribe or nation), and blocking us from connecting to the grandness, beauty and influence of the entire existence and Cosmic Consciousness .