Cigarette smokers are usually well informed that their cigarettes are bad for them and full of harmful ingredients. It is even written with capital letters straight out on the cigarette package that smoking will kill you or give you cancer. Of course they know that it is harmful. Still they choose to do it anyway. Did you ever wonder why that is?

I use to be a daily tobacco user for about 14 years before I quit 6 years ago.  Thanks to this experience, I was gifted some insights about the human psyche that I will share in this article.

Its not all about ‘self destructive behavior’, ‘addiction’ or ‘the enjoyment of smoking’, those are all just common judgmental assumptions. Will power is stronger than all of those factors anyway.

In my understanding, people who choose to smoke even though they know its harmingful does so because that decision is not made on an intellectual level.

In fact, most of the the actions we take are NOT based on decisions made on an intellectual level. We often like to think that we are so smart and intellectually driven, but more than so, we are driven by impulse, intuition, inspiration and classical conditioning from various sources.

This is why adverts work on us and corporations put billions of dollars on advertising. Most people watch toothpaste commercials on TV and think ‘ its not going to affect me, I’m too smart for these fake smiles’, yet when they go to the supermarket they buy the toothpaste brand that they recognize the most because it FEELS like the safest choice.

People know that cigarettes are harmful but smoke them anyway because it FEELS OK since so many others are doing it. Especially the cool and very intelligent heroes and main characters in blockbuster movies, who always tend to light up a cigarette right after they just either beat up the bad guy, solved a great mystery, saved the world or killed an evil monster.

We are herd animals people! or rather tribal humans. We tune in to the consciousness of the tribe and just do whatever feels ok according to that. We do what we subliminally, subconsciously and energetically  are ‘being told’ is ok to do, which also is linked to the unspoken moral codes and behavioral patterns of the tribe. 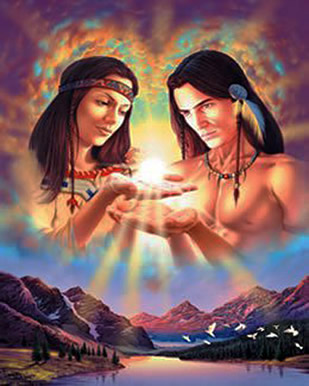 In modern society the tribe has mostly been replaced by TV programs, movie stars, corporate adverts, work colleagues, and nowadays also social media networks instead of real friends. Instead of a loving tribe that genuinly cares about us because we are inherently a part it, we get massively influenced by unloving commercial messages, distanciated social relations and corporate agendas.

Most of our decisions are thus not based on what we THINK is right or wrong on an intellectual level, but what we FEEL is right or wrong either intuitively, impulsively, subconsciously or because of habitual conditioning. The uninspired logical mindset, mostly originating from the left brain hemisphere, does not really have much of a saying in our decisions. That is also the reason why when people decide to stop smoking from that level, always end up failing.

Its easy to judge cigarette smokers for being stupid, in denial, weak, self destructive and so on, but as mentioned before, those are nothing but judgmental assumptions. I’m not suggesting that cigarette smokers don’t have any responsibility over their own body and that we should only blame society for everything. On the contrary I believe that everyone are fully responsible for their own body and should give it all the love it deserves. After all it is the temple for higher consciousness to flow trough.

This is simply a sharing of the insights and observations that helped me to find the inspiration to step out of my destructive behavioral patterns, including smoking. Perhaps it may inspire someone to break their own destructive patterns, and perhaps not, at least now its shared with the world and off my chest.