Evolution is a natural phenomena that occurs through a process of slow & gradual development/unfolding.

Within the evolutionary process there are peak scenarios where the development reaches full circle.

Evolution is however not a closed circle, but rather a continuous iterative process so these peak scenarios are end of one cycle and the beginning of a new cycle; simply iterations.

The word revolution origins from the latin word ‘revolutio’, which means ‘rotation’ or ‘a turn around’.

A revolution is thus the point at which the evolutionary process reaches a turn around (full rotation).

A revolution thus is a temporary shifts from a gradual and slow evolutionary process into a quicker unfolding into a completely new evolutionary cycle.

As can be seen in the image below, the next coming cycle after every full circle, is smaller than the previous cycles and therefore requires shorter time to complete. Every new cycle happens quicker than the earlier one. 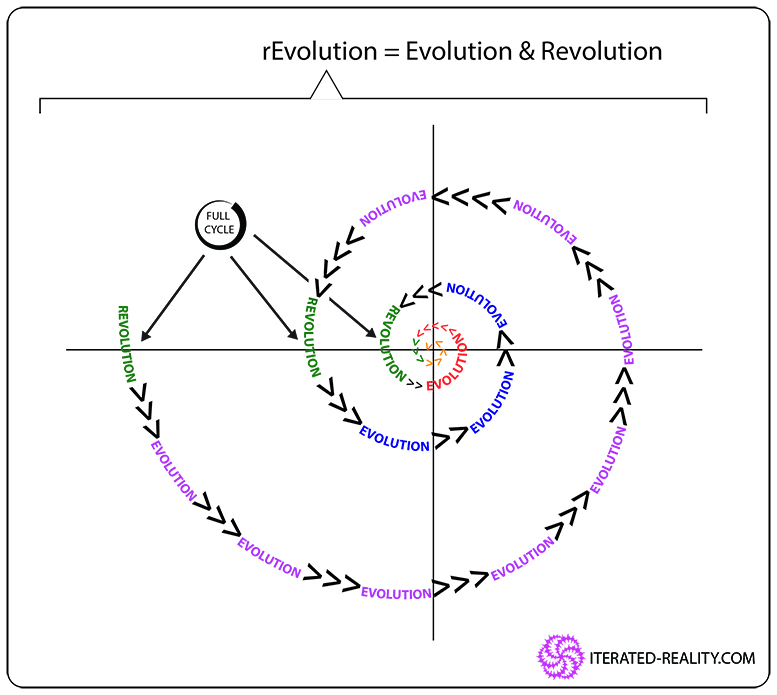 THE rEVOLUTION OF CONSCIOUSNESS

The rEvolution of Consciousness is an inevidable shift and upgrade of our individual & collective state of consciousness into an updated version of reality: an iterated reality.

The total vibrational construct of our planet is in the process of completely shifting from the old and dense reality into a light and higher vibrational reality.

This shift is inevitable because we have passed through a tipping point, as direct result of our astronomical coordinates (our point of existence within the universe) in relation to external celestial bodies (stars, neighburing galaxies etc…), the center of our own galaxy and the ending of cosmic cycles.

Since december 21, 2012: we are living in a updated version of reality where a higher level of consciousness is absolutely inevitable.

To fully understand & comprehend this shift, it is highly recommended to read more about this shift here.

And once our collective consciousness is upgraded from to the new energy construct (From Separation Consciousness into Unity Consciousness); this energetic shift will be obvious also in the material world and no longer subtle.

THIS IS NOT A POLITICAL REVOLUTION

The rEvolution of consciousness should not be confused with a political revolution.

The society and of the structures that we see around us is just a result of our individual & collective inner state of consciousness.

Even if we would be gifted the most perfectly designed society through a political revolution; without a shift in our inner state of consciousness we would simply recreate exactly the outer reality that we have seen up until today, which is; control-systems, abuse of power, corruption, fear and so on… All characteristics of the old vibrational construct.

The only sustainable & real change is through the rEvolution of Consciousness; which is absolutely inevitable process. Everything else is simply deception.

The world and our society is changed heart by heart, mind by mind and the best and most powerful way to contribute this shift is to start with ourselves; and to allow our own consciousness to expand beyond the programs that the old reality have exposed and imposed upon us.

We are living in a time where the old vibrational construct is breaking down. Starting from our individual lives and resonating outwards to the co-created outer reality.

‘There can be no peace until there is peace within’ – Unknown

At this time, Reality is attracting and presenting everyone on Earth with exactly the challenges and opportunities we need individually and collectively to go through this shift and align our selves with the iterated version of reality.

We are at a point were we can choose which of these vibrational constructs we want to be part of.

This is the inevitable process of the rEvolution of Consciousness.

A REVOLUTION OF CONSCIOUSNESS

TIME FOR A SPIRITUAL REVOLUTION